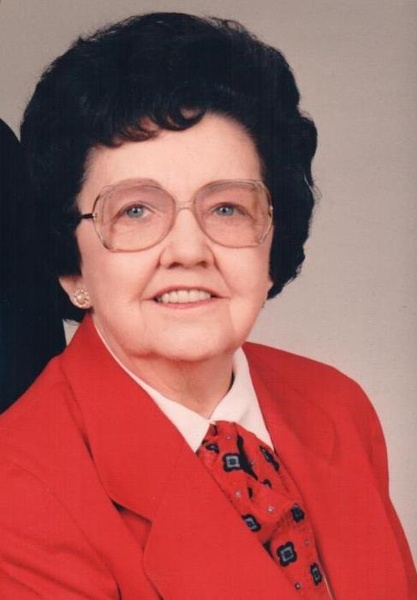 Eileen was born July 19, 1923 in Nebraska City, NE to Earl A. Bray and Nellie (Erwin) Bray.  She was raised in Nebraska City and graduated from Nebraska City High School in 1940.  On February 17, 1941, she married Jack Ray also of Nebraska City.  By 1942 Jack was in the Army.  They lived in many places while he trained as a tank mechanic.  The Ray’s had two daughters, Donna (Arlen) Kaul born in 1944 and Julie (Jim) Emery born in 1949.  In 1945 when Jack was discharged from the Army they took up residence again in Nebraska City and he began working for the Missouri Pacific Railroad. Eileen worked many years as a dental assistant to Dr. S.J. Nocita of Nebraska City retiring in 1985.  She and Jack lived in Nebraska City until coming to Sabetha, KS in 2002 when both were having health problems.  They purchased an apartment in the AC Village in Sabetha.  Jack passed away on June 27, 2003, and Eileen continued to live in the AC Village until moving to the AC Assisted Living Facility in the spring of 2012, and then to the AC Nursing Home in 2014.

A Memorial Service will be held Saturday, November 17, 2018 at 11:00 a.m. at the St. Mary’s Episcopal Church in Nebraska City, NE.  Inurnment will be in the Wyuka Cemetery in Nebraska City.  Memorial contributions may be made to the Nemaha County Home Health and Hospice, sent in care of the Popkess Mortuary, 823 Virginia St., Sabetha, KS 66534.

To order memorial trees or send flowers to the family in memory of Eileen Ray, please visit our flower store.