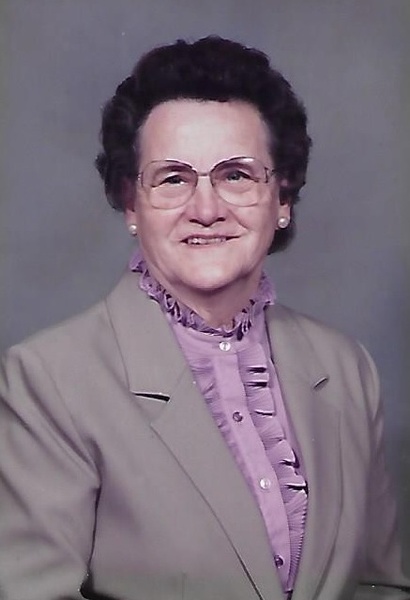 E laine Evelyn (Swanson) White was born April 18, 1925, Vilets, Kansas, in the Salem community to Arvid Conrad Swanson and Lydia Cynobia (Schuck) Swanson. She passed away Wednesday, December 2, 2020 at the Eastridge Nursing Facility in Centralia, KS.   She graduated from Vermillion High School in 1943.  After attending Washburn University for a short time she taught school at Victory school near Vilets.  During the war, she worked at the Supply Depot making wooden boxes to ship airplane engines.  She married Lawrence Arthur White on March 7, 1945 in Warsaw, Missouri, while he was on leave.

Elaine was always a busy person whether she was wallpapering with her friend, Hazel Stowell or cleaning homes for others during the early years.  In the late 1950’s she cooked homemade meals with her sister-in-law, Mabel White at Vermillion Grade/High School.  In the late 1970’s she worked at the Marysville Infirmary.  Then she worked for 17 years at the Frankfort Care Home as a CNA.  She retired moving to Wamego to care for her 2 youngest granddaughters, Samantha & Cheyenne.  They lived in Abilene & Jetmore also.  She moved back to Centralia in 2006 to senior housing.

She was preceded in death by her husband, Lawrence; her daughter, Dorothy; her grandson, Justin Smith; her parents, Arvid and Lydia Swanson; her sister, Lillian Vasti; and brothers, Lloyd, Stanley and Wesley Swanson.

No services are planned at this time due to the pandemic. Inurnment will be in the Vermillion Cemetery at a later date and time. Memorial contributions may be made to the Eastridge Nursing Facility, sent in care of Popkess Memorial Chapel, 814 Castle Street, Seneca, KS 66538.

To order memorial trees or send flowers to the family in memory of Elaine White, please visit our flower store.