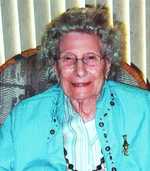 Elma Elizabeth Ehrsam, 102, formerly of Bern, KS died Tuesday, December 6, 2011 at the Golden Living Care Home in Branson Missouri where she had been living to be near her son.

Elma was born to Joseph S. Bauman and Martha Moser Bauman on the family farm south of Bern, KS on April 16, 1909.

On September 24, 1933, she was united in marriage to Loyd Ehrsam.  He preceded her in death on June 8, 1990.  They farmed Loyd’s farm south of Bern until retirement.  They then traveled extensively for five years visiting all fifty states, Canada and Europe twice.

Funeral services will be Wednesday, December 14, 2011 at 10:30 AM at the Popkess Memorial Chapel in Seneca, KS.  Rev. Bill Driver will conduct the services. Burial will be in the Bern Cemetery.

Memorials are being left to the United Methodist Church in Bern and may be sent in care of the Popkess Memorial Chapel in Seneca.

To order memorial trees or send flowers to the family in memory of Elma Ehrsam, please visit our flower store.