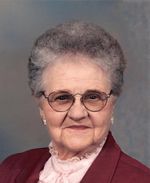 Elsie was born to Wesley Sejkora and Marie Svec Sejkora in Virginia, Nebraska. She grew up and attended school at Grant Nebraska.

On November 20, 1954 she was united in marriage to Joe Bernasek in Grant Nebraska. He survives. Joe and Elsie farmed North West of Axtell on the farm where they raised their two children, Kathy and Timothy.

She is survived by her daughter, Kathy Waldon of Tulsa, OK a sister Ann Schmitt of Grant, NE; three grandchildren, Adam, Jerry, Amber and her husband Charles; and a great granddaughter Sophia.

She is preceded in death by a son Timothy Bernasek who died October 9, 1976 and two brothers, Charlie and Jerry Sejkora.

The Rosary will be prayed Sunday evening at 7:00 PM at the St. Michael's Catholic Church.

To order memorial trees or send flowers to the family in memory of Elsie Bernasek, please visit our flower store.