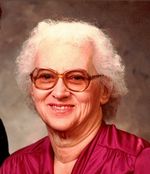 Elzada A. (Wikle) Grimm died on May 9, 2010 at the Apostolic Christian Home at the age of 88. Elzada was born on October 8, 1921 the daughter of George Wikle and Nellie (Arnott) Wikle in rural Brown County. She attended Eagle school near Sun Springs and graduated from the Morrill High School in May of 1940. She stayed at home helping her parents until she was married to Wilbur Grimm on November 25, 1945. They moved to a farm near Sabetha, Kansas. They lived and farmed for 31 years before moving into a new home in Sabetha.


Elzada is survived by a three daughters, Shirley Ann Stout of Wichita, Kansas, Janet Sue Marcou and her husband, Steve of Cave Creek, Arizona and Beverly Schuster and her husband, Dave of Sabetha; two sons, Jerry Grimm of Sabetha and Dennis Grimm of Pierce, Nebraska and 13 granddaughters and 4 grandsons and 23 great grandchildren.


Funeral services will be Wednesday, May 12, 2010 at 10:00 a.m. at the First United Methodist Church in Sabetha. Visitation will be Tuesday evening 6:30 to 8:00 p.m. at the Popkess Mortuary Chapel in Sabetha. The interment will be made in the Sabetha Cemetery. Memorial contributions may be made to the First United Methodist Church or to the Juvenile Diabetes Research Foundation sent in care of the funeral home.

To order memorial trees or send flowers to the family in memory of Elzada Grimm, please visit our flower store.