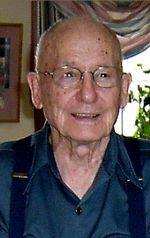 Emet was born January 31, 1912, in Dayton, New Mexico, the son of Howard and Dona (Lacy) Hightower. He graduated from Centralia High School in 1930 and attended one year of college at Highland Community College. Following college, Emet returned to Centralia to operate the Hightower Grocery Store.

On August 10, 1941, Emet was united in marriage to Kathryn Warren at Vermillion, KS.

In November of 1942 Emet chose to serve his country by enlisting in the United States Navy. Emet served in the Navy until 1945 while Katherine operated the grocery store in Centralia.

Funeral services will be at 11 a.m. Saturday, November 21, 2009, at the First Congregational United Church of Christ in Centralia.
There will be a family visitation one hour prior to service time at the church. Rev. Deanna Lewis will conduct the services. Julie Gleason will be the organist and granddaughter, Sarah Fraser, will sing. Casket bearers are John Fraser, Ray Hightower, Bill Glace, Roger Warren, Sam Warren and Nick Warren. Burial will be in the Centralia Cemetery.

Memorials are being left to the Eastridge Care Home or the First Congregational United Church of Christ and may be sent in care of the Hayes-Popkess Funeral Home.

To order memorial trees or send flowers to the family in memory of Emet Hightower, please visit our flower store.