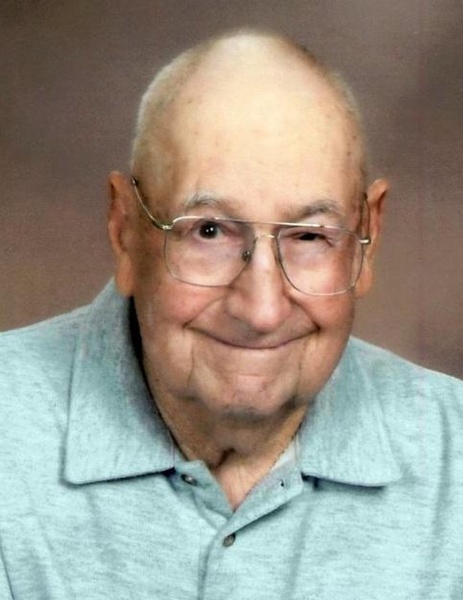 Emil was born August 14, 1921 on a farm 5 miles southeast of Fairview. He was the only son of Henry and Emma (Lear) Spellmeier and the youngest of 4 children; his three sisters preceded him in death. Emil attended Turner Grade School for 8 years, and graduated from Fairview High School with the class of 1940. In mid-1942 at the age of 19 he was inducted into the Army at Fort Leavenworth, KS from there he was assigned to Fort Bragg, North Carolina for 16 weeks of basic training. On September 26, 1942 he married Helen Mae (Bowen) Spellmeier in Washington D.C. They celebrated 62 years of marriage before her death in 2005. Together they farmed, raised a family and were active in their church and community.

Emil was an ingenious craftsman in both metal and wood. He made numerous labor saving items used on the farm and ranch. Woodworking was also a hobby of his as he made decorative items and toys for family and many friends.

Emil loved his family, the rural way of living and his country. He was a charter member of the Fairview-Morrill American Legion and he was a continuous member for 65 plus years. Above all he was a deeply spiritual man who loved his church family, most especially “Country Church” both for the music and the lunch after.

Funeral services will be held on Thursday, October 11, 2018 at 10:30 a.m. at the Fairview United Church of Christ. Visitation will be Wednesday, October 10, 2018 from 6:30 to 8:00 p.m. at Popkess Mortuary in Sabetha. Interment will be made in the Isley Cemetery. Memorial contributions may be made to the Fairview United Church of Christ or the Fairview-Morrill American Legion, sent in care of Popkess Mortuary, 823 Virginia Street, Sabetha, KS 66534.

To order memorial trees or send flowers to the family in memory of Emil Spellmeier, please visit our flower store.