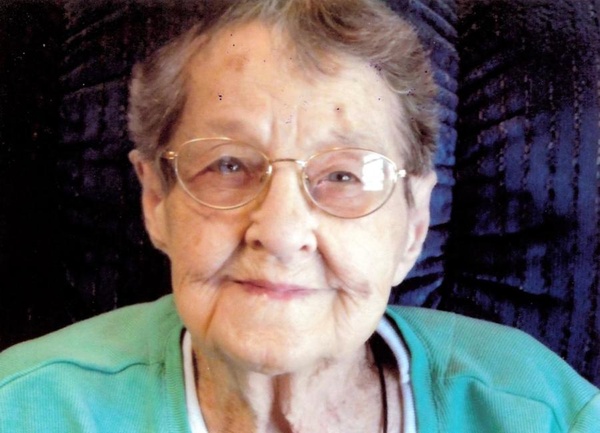 Estalene was born in Imogene, Iowa on November 11, 1924 the daughter of Fred and Myrtle (McAlexander) Carver. She was named Oca Estalene, but everyone called her Estalene. Her sister Ladene welcomed her home. In the years following, Earl, Maxine, and Eldon were born.

As Fred was a farmer, they moved around the area several times to different farms. The children attended various country schools.

When Estalene was 16 or 17, she met a cute young fella named Ross Frey, who everyone called “Babe.” He worked at the Standard Oil Station. When World War II broke out, Babe enlisted in the Army. He asked if Estalene would write to him; yes, she would and did. After basic training, Babe went to Fort Lewis, Washington. On weekends, Babe and several of his army buddies would pick apples in Washington’s apple orchards. The family never knew about this until granddaughter Shannon moved to Washington.

Estalene and her sister Ladene took a bus to California to work in the Duncan Aviation plant. They assembled airplanes. She remembers the air raid sirens and blackouts. They returned home when their mother became ill.

Babe returned to Sabetha and they were married on January 30, 1945 in Hiawatha. After living with Estalene’s parents for several months, they rented an apartment above Darville’s Drug Store on Main Street. In May of 1947, they bought a house on Ohio Street, where they lived for the next 50 odd years. Babe passed away in 2000. Estalene named her two greatest accomplishments Bonnie and David.

She was preceded in death by her parents; her husband, Babe L. Frey on March 5, 2000; a brother, Eldon Carver; and a sister, Ladene.

Funeral service will be held Monday, October 29, 2018 at 10:00 a.m. at Popkess Mortuary in Sabetha, Kansas. Visitation will be held from 9:00 a.m. to 10:00 a.m. prior to service time at the funeral home. Interment will be made in the Sabetha Cemetery. Memorial contributions may be made to the Nemaha County Home Health & Hospice, sent in care of Popkess Mortuary, 823 Virginia Street, Sabetha, KS 66534.

To order memorial trees or send flowers to the family in memory of Estalene Frey, please visit our flower store.