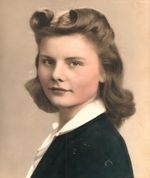 She was born March 12, 1924 the daughter of Harry Brenner and Anna Lightbody at Havensville, Kansas. She attended Havensville schools and graduated from Havensville High School in 1942. She was captain of her basketball team. She attended Topeka Trade School where she learned to weld. She worked at Rearwin Glider in Kansas City as a welder, making gliders for the war effort. She married Arthur Cottrell at the Methodist Church parsonage in Centralia, Kansas on January 6, 1946. He survives at the home in Corning on the farm where they lived together 49 years. Esther loved to create things with her hands. Her favorite activities were gardening, painting rural Kansas landscapes, sewing, quilting and cooking. She made communion bread for over 30 years. She was known for taking great pride in inspecting each new baby born in the family.

Funeral services will be Tuesday April 21, 2009 at 10:00 AM at the Trinity United Methodist Church in Corning. Casket bearers will be Mark Burdiek, Ron Moore, Chris Ridley, Jim Stambaugh, Oscar Trevino and Roy Woolsoncroft. Burial will be in the America City Cemetery south of Corning. A family visitation will be Monday, April 20, 2009 from 6:00 - 7:30 PM at the Hayes-Popkess Funeral Home in Centralia, KS.

Memorials are being left to the Esther E. Cottrell Memorial Fund. A specific charity will be named at a later date.

To order memorial trees or send flowers to the family in memory of Esther Cottrell, please visit our flower store.