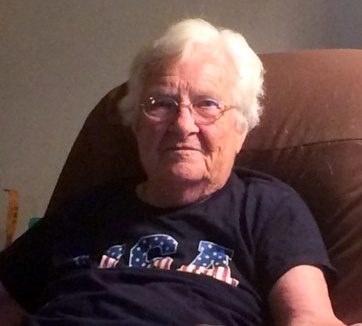 E thel Agnes (Wilhelm) Baumgartner, 88, of Sabetha, Kansas passed away Friday, April 21, 2017 at her home surrounded by her loving family.

Ethel was born on February 6, 1929 to Frank and Amelia (Heinen) Wilhelm near the Seneca and Kelly area. She attended and graduated from St. Bede’s High School in Kelly, Kansas. Ethel was united in marriage to Denzel Baumgartner on August 9, 1952 at the St. Bede’s Church in Kelly, Kansas. Born to this union were 11 children.

Mass of Christian Burial will be Tuesday, April 25, 2017 at 10:00 a.m. at the Sacred Heart Catholic Church in Sabetha.  A rosary will be recited Monday, April 24, 2017 at 6:00 p.m. at the Popkess Mortuary Chapel in Sabetha with visitation to follow from 6:30 p.m. to 8:00 p.m. Interment will be made at the Woodlawn Cemetery. Memorial contributions may be made to the Sacred Heart Catholic Church, sent in care of the funeral home, 823 Virginia, Sabetha, KS 66534.

To order memorial trees or send flowers to the family in memory of Ethel Baumgartner, please visit our flower store.