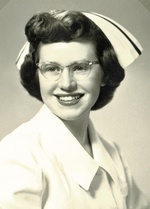 Evelyn was born on March 22, 1928 the daughter of Clifford and Catherine (Pendergast) Halbert near Humboldt, Nebraska.  She attended and graduated from Honey Creek High School in 1946.  She then attended St. Anthony’s Murdock School of Nursing in Sabetha, after the school closed she attended St. Mary’s in Salina and then completed nursing school in Wichita.  She went to work at the Sabetha clinic in 1950.  She worked for several hospitals Seneca Hospital, Sabetha Hospital and then worked at the Brown County Infirmary.  She also worked for Dr. Mali in Sabetha. In 1975, she started working at the Fountain Villa Nursing Home in Sabetha and retired as director of nursing in 1990.  She was united in marriage to Eldon William Rokey on April 14, 1949.  She was a member of the Congregational Church and then later the NorthRidge Church and served as Sunday school teacher.  She was a seamstress and enjoyed cooking and baking.  Her greatest joy was being a mother and grandmother.

She was preceded in death by her parents; two brothers, Charles Halbert and Paul Halbert; a sister, Norma Riddle.  She is survived by her husband, Eldon of the home; three sons, Kyle Rokey and his wife, Lisa of Des Moines, Iowa, Scott Rokey and his wife Theresa of Baileyville, Kansas and Paige Rokey of Sabetha; two daughters, Lisa Lyons of Sabetha and Lori Rokey and her husband, Mike Robinson of Fayetteville, Arkansas; three sisters, Mary Kimmel of McClouth, Kansas, Louella Shafer of Hiawatha and Linda Buchholz of Sabetha and 10 grandchildren, Shanna Rokey, John Lyons, Kelly Ford, Tyler Rokey, Ian Robinson, Neil Robinson, Catherine Robinson, Lexi Rokey, Piper Rokey and Irish Rokey and one great grand baby due in May and one surrogate granddaughter, Meaghan Deiter.

Funeral service will be Thursday, December 20, 2012 at 2:00 p.m. at the NorthRidge Church in Sabetha.  A visitation will be one hour before the service.  The interment will be made in the Sabetha Cemetery.  Memorial contribution may be made to the Evelyn Rokey Memorial Nursing Scholarship, sent in care of the funeral home, 823 Virginia, Sabetha, Kansas 66534.

To order memorial trees or send flowers to the family in memory of Evelyn Rokey, please visit our flower store.