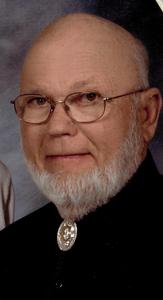 Everett was born March 4, 1936 in Surprise, Nebraska, the son of Kenneth and Mary (Way) Callaghan.  Everett graduated from Blue Springs High School.  He joined the United States Air Force after high school and served from 1956 to 1960.  After serving his country he owned and operated Mueller’s Radiator Service in Blue Springs for over 20 years.

Everett was united in marriage to Jeanette Holthaus on August 5, 1978 in Blue Springs.  They retired to Seneca, Kansas in 2001.  He was an avid NASCAR Racing fan and was the general manager of the I-70 Speedway in Odessa, Missouri for 10 years.  Everett and Jeanette square danced every Friday and Saturday night for 15 years. Among his many interest, most notably he enjoyed fishing, gardening, and bird watching.  He loved life and his family above all else.

Everett was preceded in death by his parents; a brother, Kenneth Callaghan, Jr.  He is survived by his wife, Jeanette of the home; his four sons, Greg (Janet) Callaghan, John (Brenda) Callaghan, Douglas Callaghan, and Jeff Smith; two sisters, Linda (Roger) Johnson and Karen (Phil) Newlon; six grandchildren, 8 great grandchildren along with many nieces and nephews.

Mass of Christian Burial is Saturday, June 8, 2013 at 11:00 a.m. at Sts. Peter and Paul Catholic Church in Seneca.  Visitation is Friday evening at the Popkess Memorial Chapel from 6 to 8 p.m. with a parish rosary at 7 p.m.  Inurnment will be in the Sts. Peter and Paul Catholic Church Cemetery.  Memorial contributions may be made to the Shriners Hospitals for Children or the DaVita Dialysis Center in Sabetha, sent in care of the funeral home, 814 Castle, Seneca, KS 66538.

To order memorial trees or send flowers to the family in memory of Everett Callaghan, please visit our flower store.