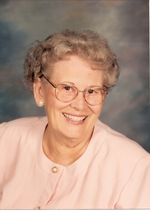 Florence Lucille Smith, age 85 died Friday October 16, 2009 at Eastridge Nursing Facility in Centralia, Kansas. She was born December 11, 1923 in Grandfield, Oklahoma to Willie Edith Daniel and Alfred Salenous Patterson. Upon graduation from Devol Oklahoma High School she was employed by Western Union and Brown Jewelry Company of Wichita Falls, Texas. From 1960 to 1984 she was employed by Horalek's Store in Centralia and worked part-time for the U.S. Postal system at Centralia and the D.M.U. North Topeka Postal Division in Topeka, Kansas. She was appointed Postmaster for Centralia on May 1, 1981 and retired as Postmaster on January 28, 1984.

To order memorial trees or send flowers to the family in memory of Florence Smith, please visit our flower store.