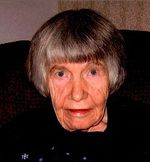 Florence Clara (Nelson) Welchert, of Sabetha, Kansas and formerly of Fairview, Kansas died Monday afternoon, May 3, 2010 at Sabetha Manor. She was 78 years of age. Flo was born on November 26, 1931 in Omaha, Nebraska. She was the daughter of Adolph Nelson and Nellie (Ballard) Nelson. Flo was united in marriage to Jerrold W. Welchert on May 21, 1961 in Omaha, Nebraska.


She was preceded in death by her husband, Jerrold Welchert on November 7, 2003; her parents, Adolph Nelson and Nellie Nelson, one brother, Leonard Lewton.

To order memorial trees or send flowers to the family in memory of Florence Welchert, please visit our flower store.