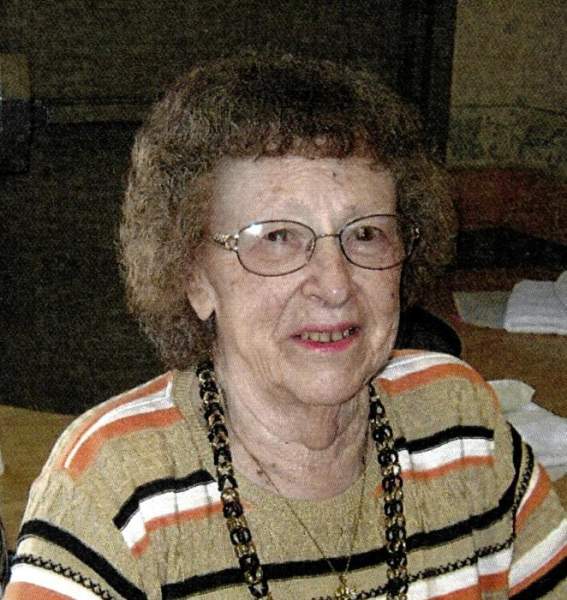 F lorence May “Flossie” Wertenberger, 93, of Sabetha, Kansas passed away Sunday, February 7, 2016 at the Apostolic Christian Home in Sabetha.

Flossie was born on March 13, 1922 to Frank and Rosina (Esslinger) Williams of Bala, Kansas. She attended school at the Bala Elementary School through the eighth grade. She graduated from Stewart’s School of Cosmetology in Topeka, Kansas.

She and her husband owned and operated Kirt’s Hi-Way Service Skelly Truck Stop in Sabetha for over 25 years. Flossie served her community in different ways. She was a diligent worker for the Four Mile Corner Labor Day coffee break for many, many years and served on the election board in Sabetha acting as supervising judge for many of those years. She was a member of the Sabetha Saddle Club and worked very hard selling advertising for the annual Sabetha Rodeo. She was a past member of the VFW Ladies Auxiliary. She was an avid sports fan attending all the sporting events, watching her children and grandchildren play basketball, football, volleyball, softball, baseball and track. Some of her pastimes included crocheting, bowling, working the cript-a-quote and collecting elephants.

Flossie was a member of the Trinity Church of the Brethren of Sabetha for many years, serving as the pianist/organist while attending there. She most recently attended the Twin Oaks EFC Church in Sabetha.

Funeral service will be held Friday, February 12, 2016 at 10:00 a.m. at the NorthRidge Church in Sabetha.  Visitation will be Thursday, February 11, 2016 from 6:00 to 8:00 p.m. at the NorthRidge Church in Sabetha. The interment will be made in the Sabetha Cemetery.  Memorial contributions may be made to a charity yet to be designated by the family sent in care of the Popkess Mortuary, 823 Virginia Sabetha, Kansas.

To order memorial trees or send flowers to the family in memory of Florence "Flossie" Wertenberger, please visit our flower store.