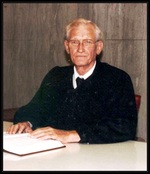 Fritz was born March 4, 1921 on a farm near Seneca, KS the son of Ferdinand and Regina Sudbeck Holthaus.    Fritz graduated from St. Peter and Paul High School in 1939, Seneca, KS.  He was drafted into the US Army in 1945 and served until 1947. He also graduated Kansas City School of Watchmaking and later graduated from the Kansas Judicial Training program.

Fritz owned and operated the Diamond Shop in Seneca for 18 years. He co-owned Seneca Skate Land and later purchased and converted Skate Land to the Seneca Motel. In 1970 he was elected as a Probate, Juvenile and County Judge in Nemaha County and later District #22 Magistrate Judge in 1976 and served for a total of 18 years.

Fritz was instrumental in helping get the Nemaha Valley High School located at its current site.  He also as President of the Chamber of Commerce initiated plans for Seneca’s first swimming pool.

He was a member of the St. Peter and Paul Catholic Church in Seneca, KS, the Knights of Columbus, past President of the Rotary, Lions Club, Chamber of Commerce and the Golf Club, and the American Legion in Seneca.

He is survived by his wife, Rita of the home in Seneca, four sons, David Holthaus (Jean) of Topeka, Max Holthaus (Amy) of Salina, KS, Jeff Holthaus (Julie) of Douglass, and Bill Holthaus of Topeka, KS; two daughters, Betty Lou Haug (Mike) of Seneca, KS and Jane Groff (David) of Topeka, and a son in law Steve Tevis of Normal Illinois, 16 grandchildren and 9 great grandchildren.

Memorials are being left to the Francis G. Holthaus Memorial Fund. A specific charity will be decided at a later date. Memorials may be sent in care of the Popkess Memorial Chapel in Seneca, KS.

To order memorial trees or send flowers to the family in memory of Francis Holthaus, please visit our flower store.