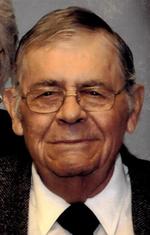 Frank is survived by his wife, Anita and four children; Margie Anderson of Frankfort, Marsha Heiman of Wichita, Melissa (Mike) Kennedy of Frankfort, and Mark (Kristina) Heiman of Seneca.  He also has seven grandchildren, Matty and Cody Anderson, Kelsey, Jordan, and Trent Kennedy, and Mitchell and Grady Heiman, and one great-grandson, Sutton Kennedy.

Family visitation will be Friday, March 22, 2013 from 5:00 – 8:00 p.m. at the Popkess Mortuary in Seneca.  Funeral service is Saturday, March 23, 2013 at 10:00 a.m. at the Knights of Columbus Hall in Seneca.  Memorial contributions may be designated to the Kelly Ball Association, the Nemaha County Military Museum, or a charity of the donor’s choice, sent in care of the funeral home, 814 Castle, Seneca, KS 66538.

To order memorial trees or send flowers to the family in memory of Frank Heiman, please visit our flower store.