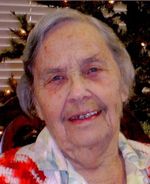 Frieda Elizabeth (Lamkey) Huning was born on December 21, 1912 the daughter of Henry Christian Lamkey and Anna Margaret (Zwifel) Lamkey in Walnut, Kansas. She attended Walnut school and graduated from Walnut High School in 1931. She attended summer school and taught two years at Mound Valley Grade School north of Walnut, Kansas. She was united in marriage to Waldo Huning on May 15, 1933. Four children where born to this union. Frieda and Waldo moved to Morrill in 1996 from Hepler, Kansas. Frieda and Waldo were married for 67 years until Waldo passed away on July 6, 2002. Frieda was a home maker, wife, mother all of here life. She most enjoyed her garden and working on the drill rig with Waldo.


Frieda died on May 1, 2010 at the Sabetha Manor at the age of 97. She was preceded in death by her parents; her husband, Waldo Huning; one son, Howard Allen Huning, two brothers, Louie Lamkey and Eddie Lamkey. She is survived by one daughter, Margaret Garrett of Sabetha; two sons, Leon Huning of Morrill, Kansas and Ray Huning of Frazier Park, California; 13 grandchildren, 26 great grandchildren, 4 great great grandchildren, and many nieces and nephews.


Funeral services will be Thursday, May 6, 2010 at 10:00 a.m. at the Popkess Mortuary Chapel in Sabetha. A visitation will be Tuesday evening, May 4, 2010 at 6:30 to 8:00 p.m. at the Popkess Mortuary Chapel in Sabetha. The interment will be made in the Morrill Cemetery in Morrill, Kansas. Memorial contributions may be made to the Cobblestone Court Residential Care or the Sabetha Emergency Medical Technicians, sent in care of the funeral home.

To order memorial trees or send flowers to the family in memory of Frieda (Lamkey) Huning, please visit our flower store.