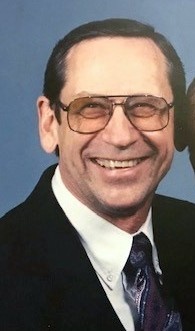 Gary was born March 13, 1933 in Morrill, Kansas the son of James E. and Mary C. (Chenoweth) Gaston. He went to Morrill schools and graduated from Morrill High School. He went to work as a traffic manager for Jones Trucking Line in Jonesboro, Arkansas.

Gary was united in marriage to Erma Jackson in 1958 at Pocahontas, Arkansas. Gary and Erma moved to Sabetha in 1976, and operated the Western Auto Store for a few years. Gary then went on to work at the Farmer’s State Bank in Sabetha where he later retired.

Gary was very proud of his woodworking and craftsman skills. He added decks to the homes he had lived in. He enjoyed hunting, fishing, and made his own fishing lures. Gary and Erma enjoyed traveling around the United States.

He was preceded in death by his parents.

To order memorial trees or send flowers to the family in memory of Gary Gaston, please visit our flower store.