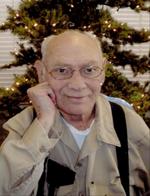 George Lee Dowd, 76, of Sabetha died Wednesday, May 2, 2012 at the Cobblestone Court in Sabetha.  George was born on August 1, 1935 the son of Chancey Dowd, Sr. and Mary (Craig) Dowd in Hutchinson, Kansas.  He was one of seven children born to this union.  George worked as a clerk in a Marysville Hardware Store for several years and construction.  George moved to Cobblestone Court in 1996.

George is preceded in death by his parents; one son, David Dowd.  He is survived by one son, George Dowd, Jr. of Blue Rapids; three daughters, Deborah Ditemore of Topeka, Elizabeth Geniuk of Seneca and Shirley Hogan of Topeka; one brother, John Dowd of Holton; five sisters, Carol Jefferies of Blue Rapids, Shirley Smith of Topeka, Bette Dowd of Frankfort, Sharon Singleton of Seneca and Kathy Dowd of Frankfort and numerous grandchildren.


Funeral services will be Monday, May 7, 2012 at 10:00 a.m. at the Cobblestone Court Sunflower Room in Sabetha.  Interment will be made in the Marysville Cemetery.  Memorial contributions may be made to the Cobblestone Court, sent in care of the funeral home, 823 Virginia, Sabetha, KS 66534.

To order memorial trees or send flowers to the family in memory of George Dowd, please visit our flower store.