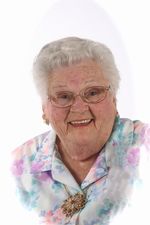 
Georgia was born on June 9, 1918, on a farm in Vermillion, Kansas to George Coulter and Etta M. (Holsapple) Coulter. She was one of the seven children born to this union.


Georgia attended school in Centralia, Kansas through twelfth grade. She had a wonderful childhood with her two brothers and four sisters. They all grew up in hard times but learned to make the best of every situation and continually love each other. Somewhere along the road of her life, she met Raymond William Boltz and they fell in love. The two were united in marriage on January 18, 1939 in Seneca, Kansas. Georgia and Raymond spent their life together farming near Centralia, Oneida, Sabetha, and the Wetmore area. Georgia also cooked for the Oneida Schools. They spent their golden years together, in Morrill Kansas, until Raymond lost his battle with cancer on December 30, 1985. The two shared many memories and their love never ended. Georgia later moved to Hiawatha where she spent 20 years at the Maple Grove Apartments and enjoyed being a fire captain. She then resided at Cobblestone Court in Sabetha before moving into The Sabetha Manor.


Georgia was a loving wife, mom, and grandma. She gave us many memories to keep in our hearts and had an amazing story to tell. If tears could build a stairway and memories were a lane, we would walk up to heaven and bring her home again.


Georgia is survived by a daughter, Norma Jean (Howard) Rohlmeier of DuBois, Nebraska, two sons, Ronald Boltz of Morrill and Larry Boltz of Topeka. Other survivors include six grandchildren: Ronda (Doug) Hammes of Seneca, Randy (Cindy) Rohlmeier of Lincoln Nebraska, Rodney (Kristin) Boltz of Junction City, Roxanne (Rick) Werner of Sabetha, Andy (Dena) Klaiber of Wichita, Kansas, and Ronna (Nick) Montgomery of Goff. She had 14 Great Grandchildren and 2 Great-great Grandchildren. She is also survived by a sister, Marguerite Elder of Oregon, Missouri and many nieces and nephews.


Memorial services will be held on Thursday, March 4, 2010 at 11:00 a.m. at the Popkess Mortuary in Sabetha with visitation from 10-11:00 a.m. Inurnment will follow at the Oneida Cemetery. Memorial contribution may made to the Hiawatha Community Hospital and sent in care of Popkess Mortuary of Sabetha.

To order memorial trees or send flowers to the family in memory of Georgia Boltz, please visit our flower store.