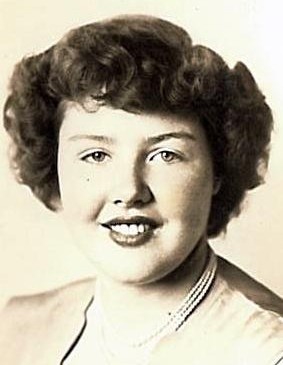 Georgia was born near Humboldt, Nebraska on November 17, 1932 to Carl and Ella (Wagoner) Morris.  Prior to her graduation from Bern High School in 1950, Georgia attended country school.  On May 29, 1955 Georgia married Donald “Buck” Windle in Bern.  The couple established their home in the rural Sabetha area before moving to town in 1966.  To this union eight children were born.

Georgia never was one to shy away from work; she held various jobs prior to her marriage and the birth of her children.  Once her and Buck’s children were older, Georgia returned to working as a caregiver at various nursing homes around Sabetha until she retired from Cobblestone Court in 1999.  In her free time Georgia enjoyed playing cards, going to bingo, and will be remembered for her infectious laugh that couldn’t be contained.  Georgia was a great baker and often had baked goods for family and friends for birthdays or holidays.

To order memorial trees or send flowers to the family in memory of Georgia Windle, please visit our flower store.