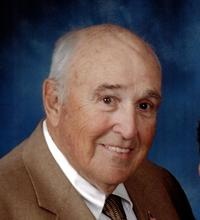 Gerry was born on April 15, 1934 in Mankato, Kansas. He was the son of Wilbur Frank Howard and Elsie Marie Parsons Murphy, the second of three children born to this union.  Gerry attended Mankato Public Schools, graduating in May of 1952.   Shortly after graduation, he volunteered for the draft, serving our country in Korea from 1953 - 1955 as a member of the Army Military Intelligence, 528 th Company.  Gerry earned the United Nations Service Medal, National Defense Service Medal, Korean Service Medal and the Good Conduct Medal.

On October 2, 1955, Donna L. Power and Gerry were united in marriage at the Harmony Methodist Church in Mankato, Kansas.  Two children were born to this union:  Pamela Sue and Steven Ray.  Gerry and Donna moved to Manhattan, Kansas in 1957.  He attended Kansas State University graduating in 1960 with his Bachelor of Science in Business Administration.  After graduation, Gerry accepted a position with the Kennedy and Coe CPA firm in Salina, Kansas.

Gerry was a member of the First United Methodist Church in Sabetha, Sabetha Country Club, and the Sabetha Lions Club.  He enjoyed coaching baseball, hunting, fishing, spending time with his grandchildren, carving, attending K-State events, music, traveling and taking care of his family.

Visitation will be at the First United Methodist Church in Sabetha on Tuesday, August 6 th from 6:30 to 8:00.  A celebration of Gerry’s life will be held at the church on Wednesday, August 7 th at 1:30 with graveside service to follow at the Albany Cemetery.  Memorial contributions are suggested to the First United Methodist Church in Sabetha or SAABA (Sabetha Area Amateur Baseball Association) in care of Popkess Mortuary, 823 Virginia Street, Sabetha, Kansas, 66534.

To order memorial trees or send flowers to the family in memory of Gerald "Gerry" Howard, please visit our flower store.