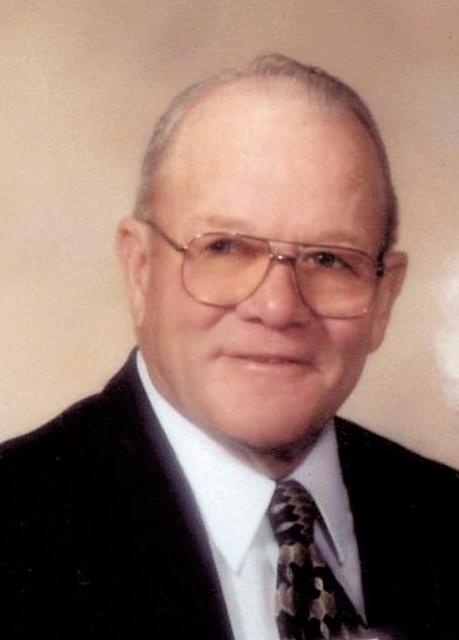 Glenn was born December 15, 1928 the son of Chris and Golda (Brammer) Aeschliman. Glenn attended school in Sabetha and graduated from Sabetha High School. He married Donna (Haxton) Aeschliman on February 26, 1950 and they farmed near Woodlawn, KS.

Glenn became the Director of Nemaha County FSA (former ASCS) in 1963, and the family moved to a farm near Centralia, KS in 1965. Glenn continued to expand his farm operation and later purchased the Hiawatha Livestock Barn in 1980. He retired from FSA in 1990, sold the livestock barn in 1997 and retired from farming in 2012.

He and Donna then moved to Sabetha’s Apostolic Christian Home. Two sons and a daughter were born to this union: Steven, David and Susan.

Glenn and Donna enjoyed square dancing and family gatherings. Glenn spent many years in a bowling league and loved to hunt and fish, including an annual fishing trip and dozens of crappie trips to Tuttle Creek Lake with his kids. He thoroughly enjoyed his farm work and especially livestock. Friends appreciated his work ethic, deep commitment to family and his underlying, teasing sense of humor.

He was preceded in death by his parents, Chris and Golda Aeschliman; his wife, Donna on November 20, 2017; his brother, Wayne; his sister, Nancy Bennett; his father-in-law and mother-in-law, Ira and Alice Haxton; and a daughter-in-law, Patricia (Woods) Aeschliman.

A Private Family Graveside Service will be held at the Sabetha Cemetery on Monday, December 7, 2020. In lieu of flowers, the family requests memorials be made to the Apostolic Christian Home Building Fund or the Sabetha Community Hospital Diabetes Program, sent in care of Popkess Mortuary, 823 Virginia Street, Sabetha, KS 66534.

The family is grateful for the loving care Glenn received the past eight years at the Apostolic Christian Home and wants to give the staff there a huge thanks for their heroic work during very trying times.

To order memorial trees or send flowers to the family in memory of Glenn Aeschliman, please visit our flower store.