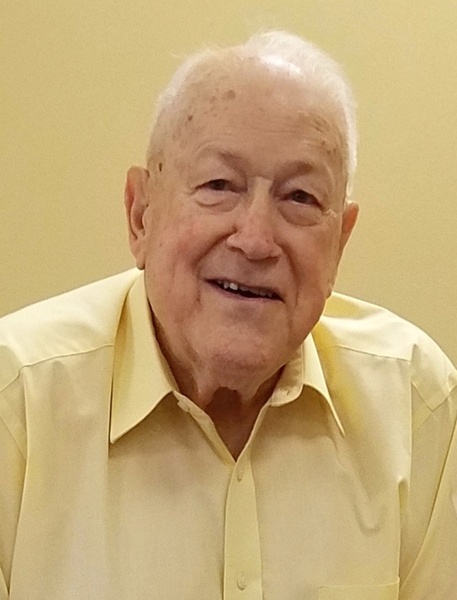 H arold “Jake” Jacob Hartter, 90, of Sabetha, KS passed away Thursday, November 16, 2017 at his home surrounded by his loving family.

Harold was born on the family farm near Berwick, KS on July 28, 1927. He was the fourth child born to William and Lucy (Wittmer) Hartter. He completed school through the eighth grade to which he then started farming on the family farm. He continued this until he semi-retired and moved to Sabetha in 1996. Farming and providing for his family was his life passion. Harold served on the board of Berwick Oil Company and was deacon and trustee for many years at the Delaware Baptist Church. Harold married Loretta Schmitt in Fairview, KS on March 4, 1951 at the Delaware Baptist Church.

He enjoyed working in his spare time in his work shop building, and crafting many items such as benches, desks, swings, and shelves which his children, grandchildren and great-grandchildren will cherish always. If you say it can’t be done, Harold would find a way and it would be perfection when finished. His love of going to auctions added to his love for multiple clocks in their home, and their chiming at multiple times. He was a dedicated servant of the Lord and family gatherings were very important and top priority to him. Grandkids would spend many hours with him laughing at all his stories of the past, and his talking doll, Julie.

Harold is preceded in death by his parents; his brothers, Wilbur and Eldon Hartter; his sister, Wilma King; and two son-in-law’s, Ronald Priest and Roger Brockhoff.

Funeral service will be Monday, November 20, 2017 at 11:00 a.m. at the NorthRidge Church in Sabetha.  Visitation will be from 9:30 a.m. to 11:00 a.m. prior to service time at the church.  Interment will be made at the Sabetha Cemetery.  Memorial contributions may be made to Delaware Baptist Church, Nemaha County Home Health & Hospice, and Sabetha Community Hospital, sent in care of the Popkess Mortuary, 823 Virginia Sabetha, Kansas  66534.

To order memorial trees or send flowers to the family in memory of Harold Hartter, please visit our flower store.