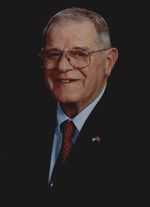 Harold W. Leuthold was born October 16, 1935 the son of Joe Leuthold and Gladys (Huff) Leuthold at rural Oneida, Kansas. He was one of six children born to this union. He grew up in the Oneida area and graduated from Sabetha High School with the class of 1954. He was united in marriage to Marilyn Williams on September 5, 1954 at the Methodist Church in Valley Falls, Kansas. Harold hauled milk for 50 years and worked as a relief driver for a number of companies. He was a member of the National Guard and helped run the V.F.W. club of Sabetha, a member of the First United Methodist Church in Sabetha and belonged to the Red Dale Schooner's Campers Club of Topeka. He enjoyed working with stain glass and made stain glass stepping stones.


Harold died on Wednesday, April 7, 2010 at the Sabetha Community Hospital at the age of 74. He was preceded in death by his parents; one brother, John Leuthold and one sister, Nelda Leuthold.


Funeral service will be Saturday, April 10, 2010 at 10:30 a.m. at the First United Methodist Church in Sabetha. A family visitation will be Friday evening 6:30 to 8:30 p.m. at the Popkess Mortuary Chapel in Sabetha. The interment will be made in the Sabetha Cemetery. Memorial contribution may be made to the First United Methodist Church Building Fund sent in care of the funeral home.

To order memorial trees or send flowers to the family in memory of Harold Leuthold, please visit our flower store.