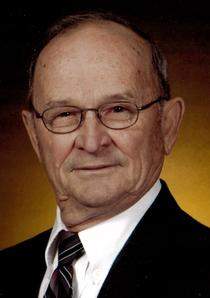 H arold Ambrose “Hod” Mitchell, 82, of Seneca, Kansas passed away Saturday, March 15, 2014.  Harold was born July 4, 1931 at Axtell, Kansas, son of Lebert and Marie (Gallagher) Mitchell.  He attended Axtell High School and graduated in 1949.  He joined the U.S. Army and served during the Korean War from November of 1952 to October of 1954.  Harold was honorably discharged with the rank of Corporal.

He did electrical line construction from 1954 to 1962 when he began work as a lineman for Kansas Power and Light Company in Topeka.  He was transferred to Seneca in 1964.

In 1973, he left Kansas Power and Light to dedicate full time to his own business, Mitchell Electric, which he started in 1965.

Harold was united in marriage to JoAnn Gudenkauf on February 8, 1958 in Seneca. They have three sons; Jim of Seneca, John of Omaha, NE, Joe of Seneca; two daughters, Janice Palmer of O’Fallon, MO and Mary Ewers of Wichita; twelve grandchildren and one great-granddaughter; one sister, Betty Broxterman of Seneca and one brother, Don of Topeka.

He was a member of Sts. Peter and Paul Catholic Church, the St. Joseph Society, the Knights of Columbus; a life member of Earle W. Taylor Post #21 of the American Legion; a life member of Seneca Memorial VFW Post # 7458; a charter member of Voiture #598 of the 40 and 8 and was a past Chef de Gare.

Harold served on the Sts. Peter and Paul Parish Council; served as Mayor of Seneca from 1983 to 1985; was a past commander of the American Legion and VFW.  He also served as First District Commander of the American Legion in 1975 and was First District Vice Commander in 1974 and 1995.  He was Co-Chairman of the Avenue of Flags Program since its inception in 1981.  He organized the Memorial Day Services at the area cemeteries and also called veterans to help with the military honors at veterans’ funerals.

To order memorial trees or send flowers to the family in memory of Harold Mitchell, please visit our flower store.