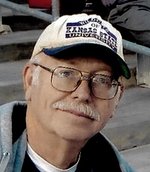 H arold David Schneider “Dave” peacefully passed away on September 20, 2012 after a courageous battle with cancer.  He was born August 16, 1944 in Horton, Kansas to Rosanna Rooney and Harold David Schneider Sr.  He lived in Fairview, Kansas until the age of four when the family moved to Victorville, California, and then later on to Duarte, California.  He attended Lutheran parochial school and then graduated from Duarte High School in 1962.  Following high school graduation, he attended Mount San Antonio College in Walnut, California where he received an AA degree in accounting and where he played in the band and met Carolyn Huffman.  David and Carolyn were married April 17, 1964 in Chino, California.  He worked for General Telephone in Southern California until moving back to Kansas in 1974.  He and Carolyn bought farmland southwest of Sabetha and built their family home.  He was employed with Justice/Flairfold/Abitibi Price in Hiawatha, Kansas for a number of years where he worked as an electrician.  He also worked at the Sabetha Manor where he did maintenance work and enjoyed driving the van for the residents.  After reaching retirement, he worked at Garrett’s Country Mart where he loved visiting with all of the customers.

He was a lifelong member of the Lutheran church.  He served as an elder at First Lutheran in Sabetha, Kansas and more recently was a member of St. Paul’s Lutheran church in Fairview, Kansas.  He was a member of the Capioma Cemetery Board.  He enjoyed traveling, especially to visit his children.  He treasured his time spent with his grandchildren and loved creating adventures for them.  He loved to fish, take pictures, garden, travel, study genealogy and visit family and friends.  David never knew a stranger and always loved to make people laugh.

He is survived by his wife, Carolyn of Sabetha.  His three children, Bonnie (Schneider) Becker and her husband Glenn of Byron, Illinois; Mark Schneider and his wife Amy of Topeka, Kansas and Jim Schneider and his wife Michelle of Bellingham, Washington; four grandchildren, Josh, Emi, Xander and Noah.  He is also survived by his sister, Carole Rencoret, of Laverne, California and many nieces, nephews and cousins and his faithful dog Molly.

He was preceded in death by his parents, Rosanna and Harold Schneider; his brother, Patrick Schneider; brother-in-law, Victor Rencoret, and his mother and father-in-law, Mary and Virgil Huffman.

Funeral service will be Monday, September 24, 2012 at 10:30 a.m. at St. Paul’s Lutheran Church in Fairview.  A visitation will be Sunday evening from 6 – 8  p.m. at the Popkess Mortuary Chapel in Sabetha.  Interment will be in the Sabetha Cemetery.  Memorial Contributions may be made to St. Paul’s Lutheran Church in Fairview, KS or the Johnson Center for Basic Cancer Research at Kansas State University, sent in care of the funeral home, 823 Virginia, Sabetha, KS 66534.

To order memorial trees or send flowers to the family in memory of Harold Schneider, please visit our flower store.