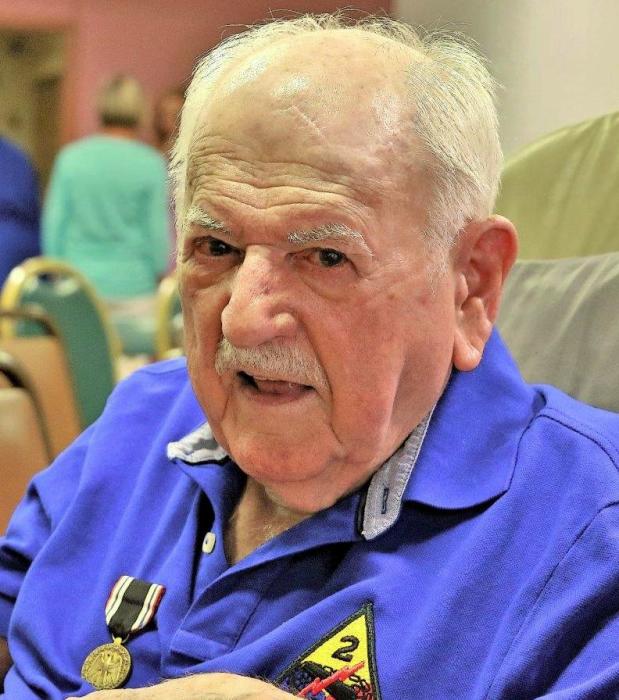 Kit enlisted in the U.S. Army at the age of 17, and served our country in World War II. He entered active duty August 15, 1944. In January of 1945, he was assigned to Company G, 41st Armored Infantry Regiment, and 2nd Armored Division in Europe. While fighting in Germany, he was captured by German Army troops on April 14, 1945. Kit was liberated by American forces on May 3, 1945, five days before Victory in Europe. He was honorably discharged at Fort Meade, Maryland on May 8, 1946.

Kit took advantage of the G.I. Bill by continuing his education in Philadelphia and at the University of Houston, majoring in mechanical engineering. He moved to Wichita, KS and worked for Boeing.

He moved to Topeka in the early 1960s and was employed in engineering design and equipment maintenance at Seymour Foods and Essex Wire. He married Mary Mason Anschutz on February 19, 1972. Kit used his experience and talents to transition into self-employment, working for more than 25 years as “Kit Beatty, The Fix-It Man.”

Kit was a witty man with an amazing sense of humor. He enjoyed several skills and hobbies in his life including hand-balancing, fencing, hunting, fishing, cooking, playing light jazz piano, and chess. He was president of Topeka Chess Club for many years.

Kit especially enjoyed two recent occasions in his life: an Honor Flight to Washington, D.C., and the presentation to him of a POW medal on his 90th birthday by U.S. Senator Jerry Moran.

It was Kit’s wish to be cremated. Memorial service will be Saturday, October 29, 2016 at 11:00 a.m. at the Popkess Mortuary Chapel in Sabetha. The family will greet friends from 10:00 a.m. to service time. Inurnment will be made at a later date in time at the Albany Cemetery. Memorial contributions may be made to the Apostolic Christian Home, sent in care of the funeral home, 823 Virginia, Sabetha, KS 66534.

To order memorial trees or send flowers to the family in memory of Harry Beatty, please visit our flower store.