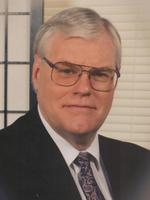 Henry Charles Wells, age 68, died peacefully at home November 13, 2010, from complications of pulmonary fibrosis. Charles was born February 8, 1942 in Horton, Kansas, to John Charles (Dutch) Wells and Dorothy Crosswhite Wells.
Charles married Agnes Dale Lacy July 29, 1961. They have three children: John Charles, Patricia Anne, and Christopher James.
Charles studied for a degree in Christian Education at Grace Bible Institute in Omaha, Nebraska. He earned a living working in the technical industry as a production manager and service manager. However, his calling was as a preacher and Bible teacher. And, he is most remembered by those who knew him as a man who communicated biblical truth and tried to be a good role model for others.
For two years, Charles struggled with the debilitating effects of pulmonary fibrosis, knowing from the beginning that it was incurable and insidious. Although he knew the expected progression of the disease and how challenging life would become, he was determined to live his life in such a way that others might see how a man of faith could face the fact of his own mortality. Charles never questioned why. He never doubted that he was in God’s hands and that His plan for him was the very best. He was always grateful that he had been given two years to help his family prepare for his departure.
Charles is survived by his wife, Agnes, their three children, John (and wife, Tami), Patricia, and Chris (and wife, Lauren), three grandchildren, Timothy (T.J.), Leisha, and Robert (Robbie), and Charles’ sister, Janet Beaulieu.
A private family Graveside Service will be held at the Albany Cemetery, north of Sabetha, KS.

There will be a Memorial Service at Popkess Mortuary, 823 Virginia St., Sabetha, Kansas 66534 on Tuesday, November 23, 2010 at 11:00 am. The family welcomes friends to join them one hour prior to the service as they begin the celebration of Charles' life.

There will also be a Memorial Service at Calvary Evangelical Free Church, 12700 No. Sheridan Blvd., Broomfield, Colorado 80020 on Saturday, November 20, 2010 at 11:00 am.
Memorial gifts may be sent to National Jewish Health, 1400 Jackson St., Denver, Colorado 80206. Phone 1-800-222-5864. Funds may be designated for the purpose of research in interstitial lung diseases.
To order memorial trees or send flowers to the family in memory of H. Charles Wells, please visit our flower store.