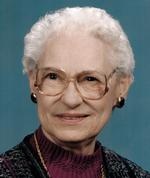 H elen I. Snyder, 95, of Sabetha died Friday, September 14, 2012 at the Apostolic Christian Home. Helen was born on November 14, 1916 the daughter of Ellis Root and Katie (Murray) Root at Beattie, Kansas.

She attended Eclipse School, a one room schoolhouse.  She started high school in Oneida and transferred to Sabetha High as a sophomore, graduating with the SHS Class of 1935.  She married Rex Snyder, also an SHS alumnus, in 1935.  They had two children, Regina and Gordon also graduates of SHS.  Helen was a dedicated wife and mother yet was very active in church and community.  In church she was a teacher, SS Superintendent, Ministerial Board member and leader of the women’s church organization.  In the community she was President of PTA, Twentieth Century Club, held all officers in the Sabetha Chapter of O.E.S. and was appointed to three offices at Kansas Grand Chapter.  She was Mother Advisor for Rainbow Girls, served on election boards and the Library Board.  In addition she volunteered for the Pre-School Children’s Reading Programs and read to the residents of the Sabetha Manor.  She began delivering Meals on Wheels which she continued until her 83 rd year.

She and Rex traveled most of the US and Canada and enjoyed two cruises.  After Rex died she traveled on her own to the Philippines to visit her son and family.

Helen was preceded in death by her parents; her husband, and a brother. She is survived by a daughter, Regina; a son, Gordon; her sisters, Donna Leuze and Lila Glassinger and eight grandchildren, 19 great grandchildren and 11 great-great grandchildren.  Helen was always ready to help family and friends and is remembered as a caring person who always shared a warm and friendly smile throughout her nearly 96 years of life.  Well done good and faithful servant.

Funeral service was held on Wednesday, September 19, 2012 at 10:30 a.m. at the First United Methodist Church in Sabetha with the Reverend Kelly Sipes officiating.   The family greeted friends one hour prior to service.  Memorial contributions may be made to Compassion International or to Mary Cotton Public Library % Children’s Books sent in care of the Popkess Mortuary in Sabetha. The inurnment will be at a later date and time at the Albany Cemetery north of Sabetha.

To order memorial trees or send flowers to the family in memory of Helen Snyder, please visit our flower store.