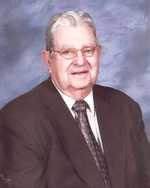 Howard was born January 23, 1927 at the family home in Beattie, the son of Ralph and Helen Connet Anderson. He graduated from Axtell High School in 1946. Following graduation he entered the US Army, receiving an Honorable Medical discharge.

In addition to farming, he worked many years as a carpenter, first for Grove Brothers Construction and later forming his own business. He built many homes and remodeled many homes in the Axtell and Beattie areas.

He is preceded in death by a brother, Kenneth Anderson.

A family visitation will be Sunday afternoon from 2 – 4 PM at the Landreth-Popkess Funeral Home in Axtell.

Memorials can be made to the Salem Lutheran Church and may be sent in care of the funeral home in Axtell, KS.

To order memorial trees or send flowers to the family in memory of Howard Anderson, please visit our flower store.