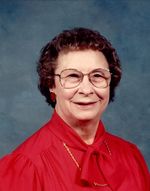 Irene is preceded in death by her husband Raymond; siblings Clyde, Otis, Milton, Clarence and Harold and a daughter Loretta (Rasmussen) Fischer.

Funeral services will be Wednesday, April 14, 2010 at 10:00 at the Popkess Mortuary in Seneca, Kansas. There will be a family visitation Tuesday evening from 6:00 PM - 7:30 PM at the mortuary. Rev. Gary Merritt will conduct the services. Bill Driver will play the organ and Marilyn Ehrsam will sing, "Now I Belong to Jesus". Casket bearers are Robert Rasmussen, Eric Deitcher, Zach Deitcher, Steve Kooser, Dan Kooser, Patrick Sheik and Tom Sheik.
Burial will be in the Bern Cemetery at Bern, Kansas.

Memorials are being left to the United Brethren in Christ Church or the Hospice Care of Kansas and may be sent in care of the Popkess Mortuary, Seneca, Kansas.

To order memorial trees or send flowers to the family in memory of Irene Rasmussen, please visit our flower store.