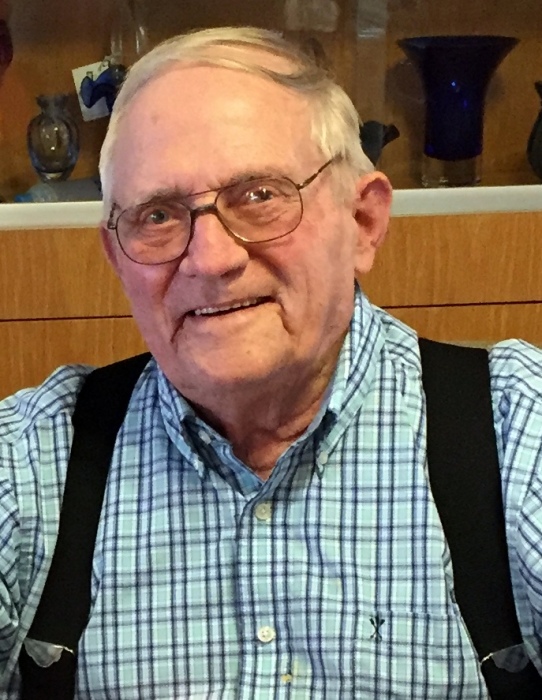 I val Ray Haflich, 90, of Sabetha, Kansas passed away on Friday, September 6, 2019 at the Sabetha Community Hospital.

Ival was born on November 8, 1928 to Armour G. and Sadie (Keim) Haflich, at the family home north of Albany.  He grew up in the Sabetha area and graduated from Sabetha High School.  He was pleased to remember that he started school at the rock school house at Albany.

He was united in marriage to Winifred Ruse.  They made their home on the farm south of Sabetha.  They had four children, Anne, Jim, Laurie and Sara.

Ival was a farmer and was never happier than when working with the land, loving to see the earth turn under whatever machine he happened to be using. He was a good steward, and in 2002, received the Bankers Conservation Award. As a young man, he worked at the Sabetha Creamery.  He was adept at many crafts and worked as a machinist at the Wilde Tool Company and at Wenger Manufacturing.  He enjoyed repairing and adapting his various farming equipment to his particular use.  His family was important to him.  He greatly enjoyed family get togethers, watching his children and grandchildren. He felt fortunate that the grandchildren lived close enough to visit the farm frequently.  One of his projects was to restore his 8N Ford tractor, with which he had started farming, and he taught his children and grandchildren to drive the Ford, stick shift and all.

He was active in several organizations.  He was Past Master of the Sabetha Masonic Lodge #162 AF & AM and Past Patron of the O.E.S. Sapphire Chapter #348 of Sabetha.  He had been a 4-H leader when his children were active in 4-H.  He belonged to the Sabetha Lions Club and had served in several offices.  He was a great sports fan, enjoying the local sports, the Kansas City and Denver pro clubs and an enthusiastic follower of K-State sports.  He belonged to the First Congregational Church for more than 50 years and was a member of the First Methodist Church of Sabetha.

A Memorial Service will be held Friday, September 13, 2019 at 11:00 a.m. at the First United Methodist Church of Sabetha. Visitation will be from 10:00 a.m. to 11:00 a.m. prior to service time at the church. Inurnment will be made in the Capioma Cemetery. Memorial contributions may be made to the Albany Historical Society or the Capioma Cemetery, sent in care of Popkess Mortuary, 823 Virginia Street, Sabetha, KS 66534.

To order memorial trees or send flowers to the family in memory of Ival Haflich, please visit our flower store.