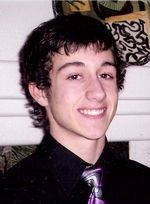 He was born March 15, 1995 the son of Mark Wessel and Karen Smart in Manhattan, Kansas. He attended Seneca Grade School and graduated from the 8th grade at Nemaha Valley Jr. High. He was currently a freshman at Nemaha Valley High School. Jacob was a member of the Northridge Church, Sabetha, KS, the Sons of the American Legion Post #21 of Seneca, Kansas.

Jacob enjoyed sports and had participated in football and track at Nemaha Valley. He also played the tuba in the Nemaha Valley Band. He had played baseball at Kelly for several summers. Jacob also enjoyed hunting and fishing. He liked music and especially listening to the Doors with his mom.

He was preceded in death by his grandparents, Francis and Ellie Wessel and Ralph Kunkle.

Funeral services will be Friday, April 23, 2010 at 10:00 a.m. at the Northridge Church, Sabetha, KS with Pastor Charlie Robinson officiating. Jacob will lie in state all day Thursday and family visitation will be held from 6:00 - 8:00 p.m. that evening at the Popkess Mortuary, Seneca. Burial will be in the Root Cemetery, rural Seneca. Shelton Griffith, Gerard Enneking, Matt Stubbeman, Dakota Kunkle, Derek Gyhra, and Andrew Todd will serve as casket bearers. Memorials may be left to the Jacob Wessel Memorial Fund; which will be determined at a later date.

Popkess Mortuary, Seneca is in charge of arrangements.

To order memorial trees or send flowers to the family in memory of Jacob Wessel, please visit our flower store.