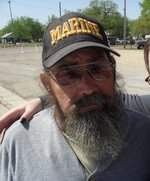 James Robert Tucker Jr., 60, of Marysville, formerly of , passed away Tuesday, May 10, 2011 after suffering from a heart attack.   He was born on November 17 , 1950 in to James Robert Tucker Sr . and Katherine  (Johnson) Tucker.  Since his father was in the Air Force, James and his siblings traveled throughout the world and lived in various places.  He attended and enlisted in the United Sates Marine Corps and he was very proud of his service.  James served in twice during his four years with the Marines.  After being discharged, he attended where he pursued a political science degree.

He married Debra Kay Boyle on December 18 , 1986, they later divorced.  To this union, three daughters were born.  To him, they were his pride and joy and always told everyone what a proud father he was.  He enjoyed going on camping trips, fishing, hunting for morel mushrooms and reading books. He was currently employed by Rail Crew Express in Marysville.  James was a truck driver for many years and also worked in the family business with his father doing electrical and plumbing work.  He had an extremely hard work ethic and didn't let any setbacks make him miss work.  He used to call bingo numbers at the American Legion in Corning and if a friend ever needed any help, he was always there.

James is survived by his three daughters, Cassandra (Cassie) Jessica Tucker Boyle of Lawrence, Kymberley Johanna Tucker of Marysville, and Miranda Mai Tucker of Lawrence; three sisters , June Traphagen of , Shirley Bramhall of , Charolene McMullen of ; one brother, John Tucker of , and one grandson, Cameron Joel.  He was preceded in death by his parents.

A memorial service will be held Friday, May 13, 2011 at 1:00 P.M. at the Hayes-Popkess Mortuary in .  Memorials may be made to the Veteran's Memorial Park of Nemaha County and sent in care of the funeral home .

To order memorial trees or send flowers to the family in memory of James Tucker Jr, please visit our flower store.