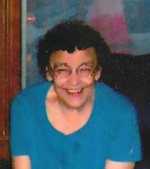 Janet was born January 11, 1933 at Sabetha, KS the daughter of Vincent Dalsing and Alice Roberts Dalsing. She attended Sabetha Schools and graduated from Sabetha High School.

Janet was a member of the St. Peter and Paul Catholic Church. Janet’s love was her children and grandchildren, she cherished the time she spent with all of them. Janet’s other love was reading, you never saw Janet having supper at Freddie’s without a book in her hand.

Janet was survived by two sons; David Warnica of Cincinnati, Ohio and John Warnica of Manhattan, Kansas; two daughters, Lynn Bramhall of Vermillion, Kansas and Jean Koch of Seneca, Kansas; a brother, Max Dalsing of Olathe, Kansas and a sister, Kay Dalsing of Topeka, Kansas. She has twelve grandchildren and 9 great grandchildren.

Mass of Christian burial will be Monday September 5, 2011 at 10:00 AM at the St. Peter and Paul Catholic Church. Father Arul Carasala will celebrate the mass. Casket bearers are Patrick Bramhall, Joel Kramer, Jared Kramer, Ethan Kramer, Randy Koch, Damon Koch and Jay Martinson. Burial will be in the St. Peter and Paul Cemetery. A family visitation will be from 2-4 Sunday after noon at the Popkess Memorial Chapel in Seneca, KS.

A memorial is being left to the American Lung Association and may be sent in care of the Popkess Memorial Chapel, Seneca, KS.

To order memorial trees or send flowers to the family in memory of Janet Warnica, please visit our flower store.