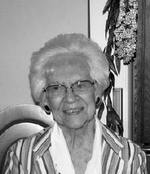 Jeanette was born September 24, 1915 the daughter of Lewis and Gussie (Rech) Jaeger in Oak Park, IL. She spent her childhood and early adulthood in Waterloo, IA. Music was a big part of Jeanette’s life, after completing studies at Ross Conservatory of Music in Waterloo, IA. Jeanette went on to do many performances and concerts including radio broadcasts, teach piano and voice lessons and lead choirs.

Jeanette married The Reverend Richard H. Lingard April 14, 1939 and the two had three children, Larry, Loretta and Lance. Jeanette and The Reverend served churches in various locations but spent a majority of their years in Marshalltown IA, Pawnee City NE and Tildon NE. The Reverend Lingard preceded Jeanette in death in 1972. After Richard’s death, Jeanette and son Lance, moved to Axtell to be close to Jeanette’s daughter Loretta and son in law Kim Winchell. She married The Reverend Charles Hanson on June 12 th 1977. Through this union, Jeanette gained one stepson and three stepdaughters; Tom, Gloria, Leslie and Karen. They lived in Axtell from 1977-1982. When Charles retired from the Lutheran ministry they briefly served Methodist churches in Bern and Vasser, Ks before they returned to Axtell in 1986 and made it their home through their golden years. Jeanette cherished her Lord and loved worshiping Him alongside dear friends at the United Methodist Church in Axtell until she no longer was able, due to failing health. Jeanette moved into the Frankfort Care Home one month prior to her death.

Other than her first husband, Jeanette was preceded in death by a son Larry Lingard and daughter, Loretta Winchell.

Funeral services are Monday, January 7, 2013 at 11:00 AM at the United Methodist Church, Axtell, KS. Rev. Susan Montgomery will conduct the services. Darlene Porting will play the organ with congregational singing. There will be a visitation Monday, one hour prior to the funeral services at the United Methodist Church. Casket bearers are Kim Winchell, Kyle Winchell, Rick Lingard, Lance Lingard, Michael Brumleve, Christopher Lingard and Gary Kabriel. Burial will be in the Rose Hill Cemetery, Axtell, KS.

Memorials are being left to the United Methodist Church, Axtell and may be sent in care of the Landreth-Popkess Funeral Home, Axtell, KS.

To order memorial trees or send flowers to the family in memory of Jeanette Hanson, please visit our flower store.