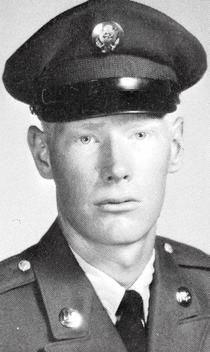 Jere graduated from Morrill High School in 1964 and attended Kansas State University.  He joined the Sabetha unit of the Kansas National Guard in 1966 and was called to Army Active Duty in 1968.  He reached the rank of Staff Sergeant while earning multiple commendations, and served until February 1972.

Jere was a long time Sabetha resident and had previously served as an EMT, volunteer firefighter and with the auxiliary police.  He was also a long time employee of Wenger Manufacturing and a member of the American Legion.

Jere was preceded in death by his father and mother, John and Edna; stepfather Ernie Hoemann; wife, Mary (Herrmann) Herold; and a sister, Judy Bestwick.

Graveside service is Friday, April 4, 2014 at 3:00 p.m. at the Sabetha Cemetery.  Visitation will be from 1:00 to service time at the Popkess Mortuary Chapel in Sabetha.  Military honors will be conducted by the V.F.W. Post #7285 of Sabetha at the cemetery.  Memorial contributions can be made to the Fragile X Foundation through Popkess Mortuary, 823 Virginia, Sabetha.

To order memorial trees or send flowers to the family in memory of Jere Herold, please visit our flower store.