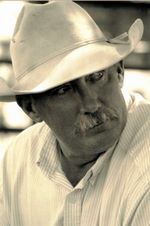 John David Boyce, Jr. was born on December 8, 1960 the son of John David Boyce, Sr. and Louise (Sherry) Boyce at Stanberry, Missouri. He graduated from Sabetha High School in the class of 1979. He was married to Patty Lehmann on April 5, 1980. They were blessed to celebrate their 30th wedding anniversary this year.


Dave was a lifetime cattleman and horseman. He enjoyed team roping, team penning, going hunting (especially elk hunting with his friends), and spending time with his family and many friends.


Dave died on July 13, 2010 at the Sabetha Community Hospital at the age of 49 as a result of an accident. He is survived by his parents, John and Louise Boyce of Sabetha; his wife, Patricia A. Boyce of Sabetha; one son, Jason Boyce and his wife, Jo of Sabetha; two sisters, Sherry McClain and her husband, Mike of Fairview, Kansas and Connie Holthaus and her husband, Steve of Seneca and two very special grandchildren, Jadyn Louise and Tristan Lane, many special nieces and nephews and lots of special friends.

To order memorial trees or send flowers to the family in memory of John Boyce, Jr., please visit our flower store.