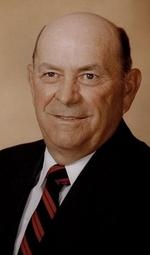 J ohn Edwin Harter, 78, of Bern, KS passed away September 8, 2011 in Tribune, KS. He died of COPD after battling the disease courageously for the past 10 years.

John was born January 14, 1933 in Sabetha, KS, the youngest son of Edwin Carl and Lillian Mae (Ehrsam) Harter. He grew up on the family farm at Bern, KS and attended the rural one room school near his home until 8 th grade. He was a 1950 graduate from Bern High School. During his youth he was active in Boy Scouts and 4-H. He attended Emporia State University for one year until being drafted into the United States Air Force, where he served as crew chief on F86 Sabre jets at Suwon, Korea. After the war, he spent 2 ½  years at Tindall Air Force Base in Panama City, FL. Upon  his discharge, he became a Technical Field Representative on F100 Fighter jets for three years in the European and North African Theatre, working for North American Aviation. He traveled throughout Europe and Africa during this time and loved to tell stories of his adventures. His favorite place was Switzerland. After he returned from Europe, he re-entered Emporia University and received a BS in Business and his Masters in Business Administration. He entered into college administration as Registrar and Director of Admissions for Emporia State University, Fresno State University and Washburn University. In 1966, he moved his family from Topeka to Bern where he farmed, operated a cattle feed yard and lived until his recent illness. He was a Vice President and Farm Service Director for 4 years at Citizens State Bank in Seneca, KS prior to retirement.

John was an avid hunter and outdoorsman and loved big game hunting, camping and fishing with his family. He had traveled around the world, but particularly enjoyed the mountains and in later years going to South Texas to Orange Grove RV park. He also took pleasure in playing cards at the casinos near Bern. John never knew a stranger and was blessed with many friends. Anyone who knew him enjoyed his sense of humor especially his caregivers.

John was a member of AKL Fraternity, Elks Club, American Legion, VFW and Rocky Mountain Elk Foundation. He was on the USD 488 School Board for 8 years and ran for office in the House of Representatives in 1992 and 1994.

While in college he met and married the love of his life, Marilyn Jean McKibben, on May 29, 1960. She survives at the home in Bern. To this marriage were born three children, Stan Harter, Lander, WY; Stephanie Wineinger (Kevin), Tribune, KS; Doug Harter (Amy) Pawnee Rock, KS. His pride and joy grandchildren are Kyler, Troy and Brooke Wineinger and Samantha and Chase Harter.

He was preceded in death by his parents; three brothers, Clifford, Howard and Robert Harter.

Funeral services will be Monday, September 12, 2011 at 11:00 a.m. at the Bern United Methodist Church. Visitation will be Sunday evening from 5 – 7 p.m. at the Popkess Mortuary in Sabetha. Military Honors will be conducted by the Fort Leavenworth Honor Guard at the Bern Cemetery. Memorial contributions may be made to the American Lung Association or the Rocky Mountain Elk Foundation, sent in care of the funeral home.

To order memorial trees or send flowers to the family in memory of John Harter, please visit our flower store.