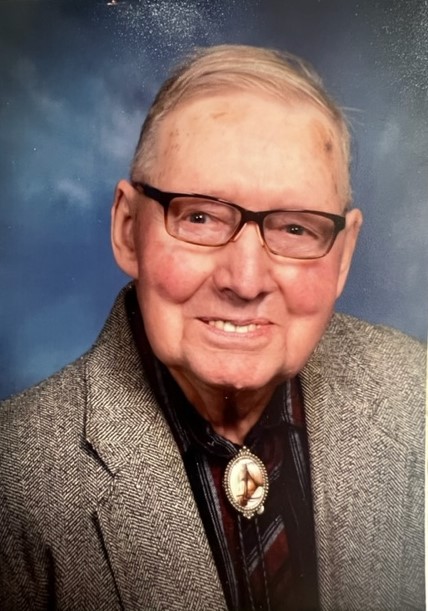 John grew up in the Meriden and Hoyt, Kansas areas.  He attended Rock Creek High School until it closed.  Then, he transferred and graduated from Meriden High School in 1948. John served in the Army in Korea from 1951-1953. After his discharge, he worked at the Colmery-O’Neil VA Medical Center in Topeka, Kansas where he met his wife, Roma.  He married Roma Lea Bauman on August 7, 1960 at the First United Methodist Church in Sabetha. To this union three children were born Sally, Gerald, and Melissa.  They lived on the family farm for 61 years before declining health required moving to the Apostolic Christian Home in April of 2021.  John raised cattle and hogs and they were partners in the Sabetha Livestock Auction for many years. After retiring, John spent many hours making wooden trucks, tractors and other farm toys, as well as shelves and other items which he gifted to family members, friends, and many toys were sent to charity.

John was a member of the First United Methodist Church in Sabetha, past member of Kansas Livestock Association, and Nemaha County Farm Bureau.  He was also a member of the Sabetha Saddle Club serving as President for several years and he enjoyed riding in the drill team.

J ohn was preceded in death by his parents; and sisters, Opal Stuessie and Shirley Richards.

Funeral service will be Tuesday, November 9, 2021 at 10:30 a.m. at the Popkess Mortuary Chapel in Sabetha.  Visitation will be held from 9:30 a.m. to service time at the funeral home.  Memorial contributions may be made to the Sabetha FFA Chapter sent in care of the Popkess Mortuary, 823 Virginia, Sabetha, Kansas 66534.

To order memorial trees or send flowers to the family in memory of John Hervey, please visit our flower store.