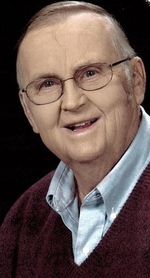 John was born in Axtell, Kansas on November 8, 1930 to John P. and Rose (Grothjan) Severin.
He was the oldest son. He had three siblings, Maryanne Selk, Marciel Strathman, and Joe Severin, they all preceded him in death.

He married Marjean Schmelzle on January 18, 1958 and they have had 53 wonderful years of marriage.

John, better known as “Jack”, lived 77 years of his life in Axtell, Kansas where he was a dairy farmer for many years. After retirement from farming, he worked as the janitor at St. Michael’s School in Axtell.

He graduated from Axtell High School in 1948. Jack served in the US army in Korea from 1952-1954, and was a member of the American Legion. He was also a member of the Knights of Columbus.

Jack was the first lay minister at St. Michael’s church in Axtell, served on the parish council, and counted the money for the church collection for several years.

He suffered kidney failure in 2005 and went on dialysis in October of 2005. In January of 2008 Jack and his wife Marjean moved to Sabetha.

Jack was a loving and loyal husband, Father, Grandfather, and Great Grandfather. He loved life and will be missed by all those that were lucky to have known him.

To order memorial trees or send flowers to the family in memory of John Severin, please visit our flower store.