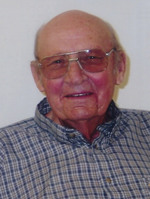 Joseph “Bud” Victor Tappehorn, 87, of Sabetha, died Friday, April 27, 2012 at the Apostolic Christian Home in Sabetha.  Joseph was born June 28, 1924 in Kelly, Kansas, the son of Victor and Johanna (Schroeder) Tappehorn.  He graduated from Kelly High School.  Joseph served in the Navy during World War II.  He was united in marriage to Jean Dillaplain on January 28, 1950, two sons and one daughter was born to this union.  Joseph was a bulk milk hauler for many years for Mid-Am.  He was a lifetime member of the VFW Post #7285, and was a past president of the American Legion.  Bud, as he was known by many, was an avid golfer, and enjoyed bowling and hunting.

Joseph was preceded in death by his parents; wife Jean, August 13, 1994; his son, Joe Tappehorn, February 4, 2011; a brother, Frank Tappehorn; and a sister, Marie Heinen.

Mass of Christian Burial will be held on Wednesday, May 2, 2012 at 10:00 a.m. at the Sacred Heart Catholic Church in Sabetha with Father Greg Hammes officiating.  Giftbearers will be Caitlyn Tappehorn and Hannah Munsterman.  Mike Heinen will serve as the Lector.  Pallbearers will be Bruce Munstermann, Brett Munstermann, Mike Heinen, Jim Heinen, Bill Heinen, Bob Heinen, and Larry Cox.  Visitation will be held from 5 – 7 p.m. on Tuesday, May 1, 2012 at the Popkess Mortuary in Sabetha with a parish rosary being recited at 6:00.  Interment will be held in the Sabetha Cemetery.  Memorial contributions can be made to the Sacred Heart Catholic Church in Sabetha, sent in care of the funeral home, 823 Virginia, Sabetha, KS 66534.

To order memorial trees or send flowers to the family in memory of Joseph Tappehorn, please visit our flower store.