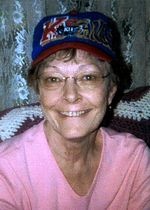 Judith Ann Romines was born on January 30, 1947 to Leroy Buerman and Ruth Coleman Buerman of Lawrence, Kansas. She was united in marriage to John W. Romines on June 6, 1964. They adopted two children John D. Romines and Jeffrey Wade Romines. She really loved her family and especially enjoyed spending time with her grandchildren. She enjoyed taking with her friends, gardening, reading, camping and spending time with her cat, Missy. She touched so many lives and will be missed greatly.


Judith died on September 24, 2009 at her residence in Sabetha at the age of 62 after a long battle with cancer. She was preceded in death by her parents; her two sisters, Diane Buerman and Sandy Alverson. She is survived by her husband, John of the home in Sabetha; two sons, John D. Romines and his wife, Rebecca of Sabetha, Kansas and Jeffrey W. Romines of Kansas City, Missouri; a brother, Ronnie Buerman and his wife, Shirley of Lawrence, Kansas; a sister, Lois Galyardt of Topeka, Kansas and six grandchildren, Kyle Romines, Jordan Romines, Jessica Romines, Tristan Romines, Grant Romines and Micah Romines all of Sabetha and several aunts, uncles, nieces, nephew and cousins.


Funeral services will be Saturday, September 26, 2009 at 10:30 a.m. at the First United Methodist Church in Sabetha. A family visitation will be Friday evening 6:30 p.m. to 8:00 p.m. at the Popkess Mortuary Chapel in Sabetha. The interment will be made in the Sabetha Cemetery. Memorial contribution may be made to Caring Neighbors Cancer Fund of Sabetha sent in care of the funeral home.

To order memorial trees or send flowers to the family in memory of Judith Romines, please visit our flower store.