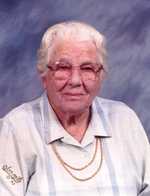 Katherine was born July 10, 1914 on the family farm south of Waterville, KS to Diedrich Wichman and Carrie Knudson Wichman.  She went to school at Chapman School in Washington County, KS where graduated from the 8 th grade.

She married Edmund B. Smith on April 2, 1935 at the Washington County Courthouse.  They farmed in Marshall County for 66 years, farming in rural Waterville from 1914-1940 and then rural Axtell from 1940 until retiring in 2001.

She was a member of the United Methodist Church, Beattie, KS and had been a member various other community groups in her younger days.

She is preceded in death by her parents, her husband, Edmund Smith who died March 29, 2001, a daughter, LaNea Hawkins March 26, 2010, four brothers, Julius, Wayne, Rudolph, Clifford a sister Lorayne Fincham, and two grandsons, Gary Hawkins who died on September 12, 1976 and James Smith who was stillborn on August 6, 1960.

The Landreth-Popkess Funeral Home is in charge of arrangements.  www.popkessmortuaries.com

To order memorial trees or send flowers to the family in memory of Katherine Smith, please visit our flower store.