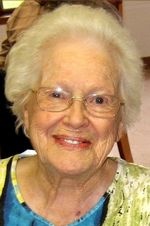 Kathryn Hightower, 93, Centralia, died Thursday morning, July 15, 2010 at Eastridge Care Facility in Centralia. A lifetime resident of the Centralia area, she was born in Vermillion on April 21, 1917, the only daughter of Harry and Olive Warren. Her parents and her brother, William Warren, preceded her in death.

Kathryn and Emet operated the Hightower IGA in Centralia for more than 40 years and retired in July 1973 after selling the store. Kathryn was active in the Centralia First Congregational United Church of Christ for many years, serving in a variety of church leadership positions. She served as a church organist and sang in the choir. She also was a member of the Order of Eastern Star.

Services will be at 10 a.m. Monday, July 19, 2010 at the Centralia First Congregational United Church of Christ. A visitation has been scheduled from 6-8 p.m. Sunday at the Hayes-Popkess Funeral Home in Centralia. The family has requested memorials be designated for either Eastridge Care Facility or the Congregational Church.

To order memorial trees or send flowers to the family in memory of Kathryn Hightower, please visit our flower store.