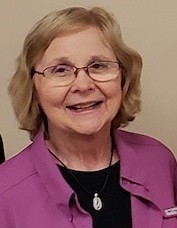 Katie was born in Virginia and moved to North Carolina in middle school.  She graduated from NC State majoring in Textile Chemistry.  Katie loved math and science as well as learning anything new. She studied Chinese, learned to shoot a gun, and became a Microsoft Certified Professional, all just for fun.  She traveled and lived all over the country including Montana, California, Nebraska and Kansas.  Because there was no textile industry in Nebraska, she earned her CPA.  She worked as an office manager, accountant, bookkeeper, and in tax preparation.

Katie loved to read and always had a book in her hand. She served on the Bern Community Library’s board and often participated in fundraising events. She always looked forward to serving root beer floats at Bern’s 4th of July celebration.

Katie’s church and faith were very important to her.  She faithfully attended and participated in community service projects. She often was seen participating in first Sunday fellowship and as greeter at the Bern United Methodist Church.

Later in life, Katie married Dallas Lee and together they had a beautiful baby girl, Emily.  She was the joy of their lives! Katie always worked hard to support her in school events and was a spectacular “Dance Mom”. She always made sure Emily had opportunities she wished she had pursued when she was younger.

Growing up, she was also in Girl Scouts and developed a love of camping. Katie, Dallas and the children would travel around in their camper seeing sites and visiting family and friends. She even acquired her own motorbike and enjoyed touring Nebraska and Kansas.

Katie was preceded in death by her father, Jack Hamilton; and her husband, Dallas Lee on March 28, 2018. Katie is survived by her mother, Frances Curtis; her sister, Kristina Hicks; her brother-in-law, Ken; her daughter, Emily and a son-in-law, David Souter. She is also survived by her step-children, Dana, Dustin, and Cami Lee.

To order memorial trees or send flowers to the family in memory of Kathryn Lee, please visit our flower store.