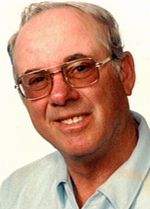 Keith Charles Hailey was born on September 22, 1927 the son of Everett A. Hailey and Mae (Baumgartner) Hailey in Sabetha, Kansas. He was one of five children born to this union. He attended Pleasant View School until his freshman year when he went to Sabetha High School. He entered the United States Navy in 1944. When he was discharged from the Navy he returned home to farm with Carl Baumgartner. Keith was united in marriage to Darlene Habegger on August 11, 1967. Two daughters were born to this union. Keith was a member of the Woodlawn Baptist Church. Keith loved farming. He was an avid bowler and watched all sports. He loved to dance and visited with everyone. Keith also served on the RC & D board and the Nemaha County Soil Conservation Board. He also was a member of the Lions Club of Sabetha. Keith enjoyed the Honor Flight to Washington, D.C. last year. Keith enjoyed travel and taking pictures. He would make the pictures into slides and presented them to nursing homes in Centralia, Seneca and Sabetha.


Keith died on June 20, 2010 at the Apostolic Christian Home in Sabetha at the age of 82. He was preceded in death by his parents; three sisters, Arlene Wissmath, Donna Staerkel and Avis Griffin and one brother, Glen Hailey. He is survived by his wife, Darlene Hailey of Goff, Kansas; two daughters, Cynthia Studer of Holton and Susan Hailey of Sabetha, Kansas, and 5 grandchildren, Jakob Studer, Haylie Studer, Lexie Rokey, Piper Rokey and Irish Rokey.


Funeral services will be Wednesday, June 23, 2010 at 10:30 a.m. at the Popkess Mortuary Chapel in Sabetha. A visitation will be Tuesday evening 7:00 to 8:30 p.m. at the Popkess Mortuary Chapel in Sabetha. The interment will be in the Sabetha Cemetery with military honors conducted by the V.F.W. Post #7285 of Sabetha. Memorial contributions may be made to the Woodlawn Baptist Church or the Apostolic Christian Home, sent in care of the funeral home.

To order memorial trees or send flowers to the family in memory of Keith Hailey, please visit our flower store.