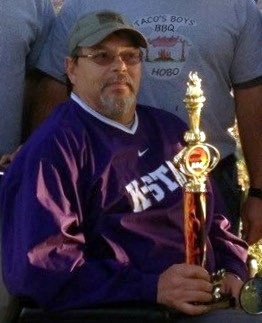 L arry (Taco) Dale Meyer, 66, of Sabetha, Kansas, passed away on June 23, 2016 at the Apostolic Christian Home in Sabetha after a long battle with Progressive Supranuclear Palsy.

Larry Dale Meyer was born in Axtell, Kansas to Mary (Betty) Elizabeth Brower and Joy Lee Meyer on November 11, 1949.  He started his school years in Oneida, Kansas and graduated from Sabetha High School.  He married Joyce Marie Rogers on April 30, 1972 in Fairview, Kansas.  Together they raised three sons.  He served as a Sergeant in the United States Army from April 1969 through April 1975 and served in Germany during the Vietnam War.  He worked for Mid-America Dairy, IMAC and finished his career retiring from MAC in June 2010.  He was a member of the American Legion and VFW.  Larry was an avid fisherman and enjoyed spending time at the lake with his sons.  He also enjoyed watching his children and grandchildren participate in various sporting activities.  He loved to tinker around in the garage and was a K-State fan.

Memorial service will be Wednesday, June 29, 2016 at 11:00 a.m. at the First United Methodist Church in Sabetha. Visitation will be from 9:00 a.m. until service time at the church. Inurnment will be made at the Oneida Cemetery in Oneida at a later date. Memorial contributions may be made to a fund yet to be designated, sent in care of the funeral home, 823 Virginia, Sabetha, KS 66534.

To order memorial trees or send flowers to the family in memory of Larry Meyer, please visit our flower store.